The Premiership season is on the cusp of splitting into three competitions with two teams – Chelsea and Man United – racing head-to-head for the title, five teams – Liverpool, Tottenham, Aston Villa, Manchester City and increasingly Arsenal – battling for the precious final two Champions League places, and not less than seven teams fighting for survival, Portsmouth not included. On a week-end with big top of the table implications, Arsenal came into Stamford Bridge with redemption and contention in mind, hoping to take at least one point following last week’s trouncing inflicted by Man United at the Emirates. Spurs hosted Villa in a direct Champions League spot clash, while the Merseyside derby once again proved true to its character, a fiercely contested, exasperating affair that provided the red side of Liverpool a greatly needed lift, but also hope that a once promising season can be salvaged somehow.

Arsenal took the field against Chelsea in essentially the same shape as the prior week, placing a lot of responsibility on Arshavin to deliver from one of his genial incursions. Wenger’s game plan was disrupted by Drogba’s early goal. Song erred on this play, losing Drogba at the back post, but the truly glaring problem for Arsenal is the play of William Gallas, awful again, picking up his indifferent performance from last week. Arshavin nearly equalized shortly after, but Arsenal faced a Peter Cech in excellent form on this day. As Arsenal’s posse of little attackers, or as the commentator referred to “flea footed playmakers,” edged forward, Chelsea executed the perfect break-out as Man Utd had done last week. This time Drogba, the Arsenal tormentor, and Anelka collaborated to produce a stupendous goal by the Ivorian. A dagger for Arsenal, the way back now insurmountable. Fabregas’ edge of the box free kick was the last real chance, though Drogba’s was ever close. 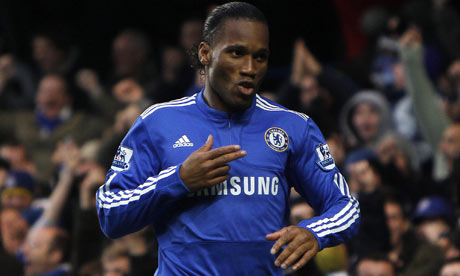 It seemed puzzling why Wenger took out Sagna again, Arsenal’s most productive and energetic defender, but left Nasri in alonside Rosicky, Fabregas and Arshavin. Chelsea won without pushing, playing intelligently and showing no lapse of concentration stemming from the Terry story, correctly. Chelsea’s roster and technical positioning was superior on this day, but Arsenal is not far off. The problem, again, is Wenger’s spendthrift limitations. He failed to bring in a center forward in January to fill a glaring gap up front. Not a CR9 splurge, but a legitimate physical presence. Now come the consequences.

Arsenal’s North London rival Tottenham lost two points in their home game with Aston Villa, the Birmingham club was fortunate to earn a point after coming under siege in the last half hour of the match. Neither team was able to take full advantage of Man City’s setback, with a five-pack now vying for the last two places in the champions League. It’s a long way to go still, and City has two matches in hand, Villa one. By the way, the Mancini honeymoon e finita.

Liverpool played a man short for an hour at Anfield in the anything-but-family-derby, another physical Merseyside encounter that yielded six yellows and two reds. A crucial goal from Dirk Kuyt, his 50th for Liverpool, and sufficient concentration was the difference. It was good to see Ryan Babel in the mix again for Liverpool. The match was played in the early afternoon, yet the aggression was unleashed freely. This was a bruising affair from start to finish, the home team with three golden points to show from it. Everton’s recent resurrection came to a temporary pause, though a UEFA place looks well within reach for David Moyes’ men. For Rafa Benitez, it will be challenging to get his battered players up for the next fixture, tomorrow’s trip to London for a date with another tired bunch, Arsenal.