Internazionale Milano completed the Italian league-cup double on Sunday, matching Bayern Munich’s achievements in Germany and Chelsea’s in England, setting up a level clash in Saturday’s Champions League final. As anticipated, Barcelona retained the La Liga title without emotions, a positive ending that nevertheless felt more like a consolation prize for a club with the highest expectations. In South America, Argentinos Juniors held on to win the Argentine Clausura, edging out Estudiantes and claiming their first championship in 25 years. Meanwhile in Turkey, a different story, as Fenerbahce supporters rioted in Istanbul after their team lost the title to Bursaspor on the final day of the season.

Celebrations went on deep into the night in Milano’s city-center after Inter narrowly defeated Siena to claim the 2009-2010 Scudetto, an accomplishment more precious than on previous occasions. Inter did not look dominating in the fall or capable of making a deep European run, but credit must be given to Mourinho who instilled a mental attitude and toughness in his team that the players lacked under Mancini. With Juventus and Milan putting together poor seasons once again, Inter was in control for virtually the entire season. The challenge improbably came from Roma on the wings of a 24 match unbeaten streak, an incredible run that propelled Ranieri’s team to the top of the table near the end. Yesterday, Inter was the worthy champion, as demonstrated also in the direct Coppa d’Italia clash.

Jose Mourinho wants to leave Italy as a winner.

The only concern in Inter’s happy world is Mourinho’s situation, one that even the team’s owner Moratti admitted is unclear about. Mourinho has stated repeatedly that he loves Inter but does not enjoy working in Italy and has the ambition of going to Real Madrid at some point in the future. The timing could not be any more perfect. Real completed a sub-par season and it is simply a matter of time before their Chilean coach Manuel Pellegrini is replaced. The likeliest scenario has Mourinho leaving Inter after the Champions League final – coincidentally, in Madrid – and taking over Real after Florentino Perez and Moratti agree on compensation for Mourinho’s services. Prior to the World Cup, expect Mourinho to be fully in charge of Real Madrid – that is if he is not turned around by the incessant pleas to stay from Inter players and fans.

Speaking of Madrid, Real finished the season with a draw in Malaga, a meaningless result for their La Liga standing but a golden result for Malaga, who escaped relegation on the final day. The body language of Madrid’s players revealed so much about Pellegrini’s shortcomings and the club’s current culture. The Chilean was simply too indulgent with the egos of Higuain and Ronaldo in particular. It will be spectacular to see Mourinho transform this group of mega talented individuals into a team. Unquestionably he will clash with some along the way and the challenge will be as great for Mourinho as it will be for the players.

Barca’s season ended with celebrations and Messi’s Pichichi as the top La Liga goalscorer. Two more on Sunday gave Leo 34 for the season, tying a club record. Barca finished in style, dominating from start to finish and displaying its unique, beautiful game to the very end. Another La Liga title and a Champions League semifinal would be considered successful 99.99% of the time, but for Barca this season still feels just short of projections given their incredible group of players. The slightly lighter schedule might be a blessing in disguise for the Barca players, who have been going non-stop over the past couple of years and have the World Cup summer ahead. But the future is highly contingent on one event: Joan Laporta is stepping down as Barca’s President following an exceptional tenure. The winner of Barcelona’s June 13 Presidential elections will determine whether or not Guardiola stays, but it is hard to imagine he would abandon his players for any other club in the world. Barcelona is a family, a special group whose core will be back intact next year, still as the best in the world, with only a few changes. 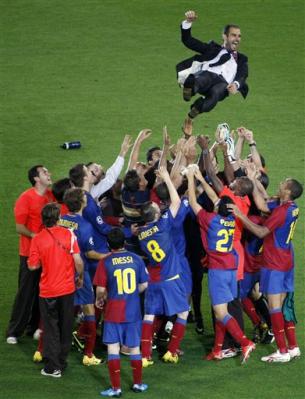 In Argentina, Estudiantes traveled to Santa Fe on Sunday and did all it could to keep their Clausura hopes alive, but in the end their win at Colon was insufficient. Estudiantes lost the title on the next to last day of the season, when Veron received a red card for elbowing a Rosario Central player and left his short-handed team battling to a stalemate. In the meantime, Argentinos’ miraculous comeback from 1-3 to 4-3 against Independiente made them worthy champions in the eyes of the public. Yesterday, accompanied by traveling support as massive as ever witnessed for the little club, Argentinos won at Huracan to seal its rare championship. It will be interesting to see what key players Argentinos manages to keep in the off-season, as Mercier and Sosa have already been rumored to be moving on to big clubs. For Estudiantes, Copa Libertadores can provide some redemption. Internacional Porto Alegre comes to La Plata on Thursday with a 1-0 first leg lead, one that Estudiantes captain Veron will do everything to overturn. 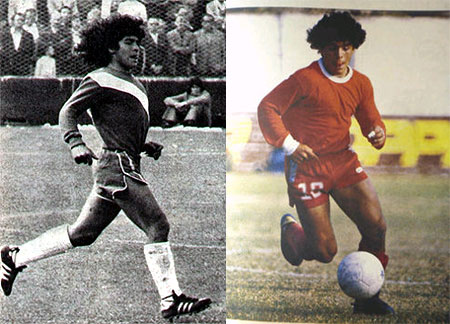 Chelsea won the FA Cup, defeating Portsmouth more soundly than the scoreline indicated in a match that included an incredible miss by Salomon Kalou. No drama in Berlin though, where Bayern annihilated Werder Bremen to win the German Cup and extend its great momentum to Madrid. Finally, drama and sadness ended in violence in Istanbul over the week-end. Fenerbahce fans stormed the pitch at the end of their team’s draw, in celebration of winning the Turkish league championship. With confetti flying all over the stadium, the people learned that in fact local rival Bursaspor had won their match and was in fact champion. Shocked, confused, crying and then raging, the Fenerbahce masses ripped up the stadium, then continued to battle with police in the streets.

Fenerbahce fans celebrated a championship title, before realizing that in fact their team had lost the title to local rivals Bursaspor.