The Premiership title is now Chelsea’s to lose following its controversial win in Manchester on Saturday, but Arsenal’s dramatic win means will be a close race to the finish – the closest three team race in recent Premiership history. A similar story is playing out in Serie A, with Inter, Roma and Milan all winning over the week-end. Barcelona showed plenty of stamina in thrashing Bilbao, then the next day Real Madrid’s away win set the stage for the most anticipated match of 2010. In Germany, Schalke missed a golden opportunity to effectively take control of the Bundesliga, while in Argentina the roof caved in on Diego “El Cholo” Simeone as San Lorenzo continued to suffer through a dismal season.

Ancelotti started Chelsea’s match against Manchester United with Drogba on the bench, inserting Joe Cole as a fifth midfielder with Anelka as the lone striker. The strategy worked out well, as Chelsea deservedly went ahead through a Joe Cole back heel goal engineered by Florent Malouda and had a clear penalty not given. Man United’s difficulties in the midfield were apparent as Paul Scholes & co. struggled to create or control the flow. The home side came out for the second half with more determination, but Wayne Rooney’s absence was blatantly obvious. Ancelotti threw Drogba into the mix and shortly after the Ivorian scored from an off-side position the goal that would prove to be the winner. Human error, but a clear off-side. Man United protested vehemently, to no avail. Macheda’s goal also should not have been allowed, yet it gave United hope and made for an exciting last ten minutes. In the end, Chelsea took the crucial three points and, officially, that is all that matters.

It is certainly not over. Chelsea still has to play at Tottenham and at Liverpool, while both Man United and Arsenal have dates with Manchester City and Tottenham. But with Rooney’s injury and with Arsenal’s pile of injuries getting higher, as well as the Champions League commitments for both of those clubs, Chelsea must be considered best positioned to take the Premiership. Failure to do so, combined with the early Champions League ouster courtesy of Mourinho’s Inter, might spell the end of Ancelotti’s brief era.

Liverpool went to Birmingham with a must win mission and certainly created plenty of chances, but it was not to be. Why did Rafa Benitez replace one of the best scorers on the planet with twenty five minutes left in a tied match that he had to win? Incomprehensible, even now. Steven Gerrard’s consternation was more than apparent. Maxi, Ryan Babel, David Ngog all wasted good chances that could have exculpated Rafa, but since none came to fruition, the responsibility is squarely on him for the two points dropped.

Playing with many reserves, Arsenal grabbed three enormous points in the fourth minute of injury time against Wolves to maintain pace with Chelsea, in a further boost of confidence ahead of Tuesday’s trip to Barcelona. Fulham returned to winning after three consecutive Premiership defeats, West Ham battled hard for its deserved away point at Everton, Spurs came undone at Sunderland, to Aston Villa’s delight, while Man City had fun with Burnley.

Inter’s comfortable win at home failed to extend their minimal lead at the top of the table as both Roma and Milan won tricky away matches at Bari and Cagliari, respectively. Looking ahead it would appear that Roma enjoy the most approachable schedule of the three, Milan the most difficult. In fact, the Serie A Scudetto is now coming down to the wire and none of the contenders can afford to drop points the rest of the way. Failure to win the Scudetto would be most devastating for Inter, whose lead at the top was eleven points not that long ago. For Roma, the dream continues.

Catania won the Sicilian derby against Palermo, which, along with bragging rights, moved them further away from the relegation zone. What an inspired signing has Maxi Lopez been! With its win Sampdoria moved up to fifth, even on points with Palermo, while Napoli, wearing an away red???, earned a point at Lazio to boost its European chances hopes. Juve was taken apart at Udinese, falling to seventh and further depressing the clubs prospects.

Two Bojan Krkic goals and another from Messi gave Barca to a more comfortable win than expected against a tough Athletic Bilbao side, ahead of the week that defines season for the Catalans. Tuesday Arsenal comes to Barcelona for the return leg of the Champions League, then Saturday the match that will be seen around the world against Real Madrid. Guardiola was relieved to put this match to a successful rest and can now concentrate on Arsenal. Bojan, a last second replacement for Ibra who pulled a muscle in warm-ups and is now questionable for Arsenal, made a great impression every time he has played this year. 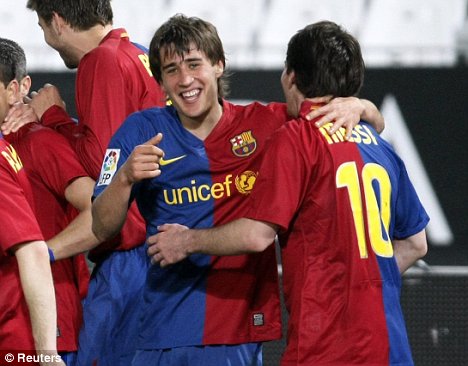 Atletico Madrid came away with a 3-0 win over Deportivo la Coruna, a flattering scoreline that nevertheless provides the Colchonerros with momentum and hopes for a European spot next year. This despite the miserable start and inconsistent performances throughout the campaign. Sevilla and Valencia both won at home by the same score, while Real Madrid’s defeat of Racing Santander was again propelled by Cristiano Ronaldo and Higuain. Saturday, April 10, Barcelona arrives at the Bernabeu.

What an opportunity missed for Schalke. Up two points on Bayern Munich, a win at home would have provided a five point cushion that would have been hard to relinquish the rest of the way. It was not to be. To its credit, Bayern went into the Schalke arena and came away with three crucial points and the Bundesliga first place, one ahead of Schalke. Both clubs have tough tests ahead. Munich plays at third place Leverkusen, Schalke has an upcoming date with Werder Bremen.

In Argentina, a 1-0 home loss against lowly Gimnasia la Plata was the last straw for San Lorenzo. Diego “el Cholo” Simeone resigned immediately after the match and this time was simply at a loss to explain why a team with so much talent cannot score goals (only seven on the season). Sebastian Mendez, former San Lorenzo defender, will oversee the club until the end of the season. Independiente continued its stride toward the Clausura title, while second place Godoy Cruz kept pace just three points back. Estudiantes and Banfield played to a draw, while Boca and River lost again to Rosario Central and Lanus, respectively, further signs of the anemic Argentine league.

← Word on the Europa League
New York Soccer Has Arrived, For Real →