Real Madrid came from behind strongly against its eternal city rival to maintain pace with Barcelona over the week-end. Dead even on points, both clubs now appear to be looking forward to the April 11 direct clash that, in all probability, will determine La Liga. In the process, Real exposed Atletico’s critical shortcomings that have repeatedly doomed the club this season. For the colchoneros, it was a perfect demonstration of both technical and psychological inferiority, amidst teasing glimpses of brilliance and hope. 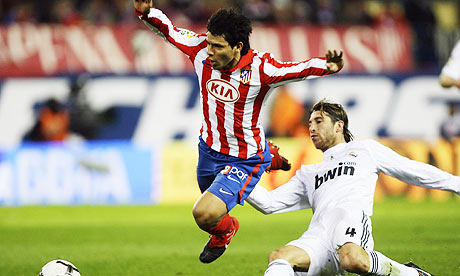 In fact, Atletico started the match well and then things got even better, when a mundane play turned rapidly into a goal scoring chance. Reyes converted impeccably and the game was now under control. But instead of playing with conviction, Atletico was happy to stop attacking, contain or simply break up Real’s construction. It went on like that for the rest of the first half, a dull performance for a team with Forlan, Kun Aguero, Reyes, Jurado and Simao Sabrosa on the field. Rather than defending by attacking and using its best players, the game turned into a stalemate until the second half.

Real came out in the second half like a pack of hungry wolves and the inevitable happened. Two quick goals came against a team that was no longer on the pitch. The third one, an incredible giveaway from Thiago to Higuain, was laughable for one side, indefensible for the other. Rather than doing what Atletico had been doing, at 3-1 Real kept pressing with the killer instinct that Atletico lacked. Still! Amazingly, Atletico got a lifeline with plenty of time to rectify its lost opportunities. To no avail. Each club’s character was fully on display on Sunday night.

Ronaldo and Higuain play with the confidence and the hunger, sometimes selfishness, characteristic of so many top goalscorers: Inzaghi, Ruud van Nistelrooy, Luca Toni, Fernando Torres, Gilardino, etc. They have an insatiable appetite and a total determination to break down the opposition. The large personalities at Atletico carry top egos without delivering like-sized performances consistently. This is a problem that only a strong manager can fix, one that Quique Flores has improved but not resolved.

Next week-end, the final rehearsals for Real and Barcelona prior to the match that will be seen around the planet. Barca have a tough match at home against Athletic Bilbao, Real travel to Almeria. Meanwhile, Atletico is left to focus on Thursday’s Europa League clash against Valencia.