Manchester United’s win over Liverpool avenged the bitterness of last November, while Chelsea completed one of the most difficult weeks of Carlo Ancelotti’s era, with Arsenal, Tottenham and Man City marching on. After the usual anticipation and explosiveness, the greatest super-classico on the planet, Boca Juniors vs. River Plate, was suspended by natural conditions. In Italy, Milan missed an opportunity but Roma closed ever closer to the top spot, while Fiorentina won emphatically. Maybe Juve’s week was actually worse than Chelsea’s. In Spain, the Leo Messi phenomenon was on display once again.

Liverpool fans’ massive anxiety of losing Fernando Torres was not eased on Sunday. Despite starting the match with a solid formation and enjoying the best start Rafa could have hoped for, it was not enough. Man United were even soon after through Rooney and deservedly won through a beautiful second half goal. There was plenty of time for Liverpool to react, but they could not find a way. United passed another test and now sits stands alone at the top of the Premiership on a day when most of the stadium sported the green and gold scarves of the club’s first incarnation in protest of the Glazer family, United’s American owners.

That is because Chelsea, even with a game in hand, could only come away with one point from a tough away match at Blackburn. This result capped a strenuous week for Signor Ancelotti. With his side eliminated dramatically from the Champions League by Jose Mourinho’s Inter, all focus must go into the Premiership and the FA Cup. Chelsea’s result allowed Arsenal to claim second place for the time being, just two points behind United. Arsenal has the lighter schedule the rest of the way and there is no doubt that Arsene Wenger is sniffing at his first opportunity for a title in a long time.

Spurs extended a positive streak, thanks this time to the re-emergence of Eidur Gudjonsson after Roman Pavlyuchenco was lost to injury. Man City maintained chances with three precious points away at a tired Fulham, but Aston Villa lost points at home and Liverpool is in danger of fading too far. At the bottom, Portsmouth’s dramatic 3-2 win over Hall provided its passionate fans some joy on a week when the club’s relegation was essentially assured.

Inter was back in Sicily to take on fourth place Palermo, an excellent team with a very real chance to play in the Champions League next season. It ended equitably in a draw on Saturday, paving the way for Milan to claim sole possession of first place in Serie A on Sunday. It was not to be. Napoli was unfortunate not to come away with three points from San Siro, as it created more chances. One of Milan’s elders, Filippo Inzaghi, celebrated his goal as he typically does – as if it is the most dramatic, extraordinary moment of his life. Like him or not, this man consistently demonstrates the same passion and hunger for goal consistently, as if he was an emerging young star vying for attention. 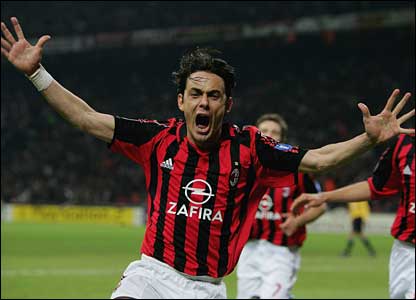 Sampdoria inflicted further misery on Juventus after its humiliating exit from Europa League and in the process leapfrogged Juve in the battle for fourth place in Italy. The protagonists? Antonio Cassano, of course, with the collaboration of Juve’s third string goalkeeper Chimenti, who broke his hand punching something in frustration after the match. Great day for Fiorentina, following up on last week’s win away at Napoli and now its European aspirations fully back on track.

Real Madrid, Valencia and Barcelona won this past week-end, maintaining the status quo at the top of La Liga, although Sevilla lost fourth place to surging Mallorca, who crushed an uninspired Atletico Madrid team with big defensive problems exposed again. Real had to fight hard to get past a tough Sporting Gijon team, all the goals in the second half. In Zaragoza, Leo Messi put on a show once again, before Zaragoza made it interesting with two late goals. Leo is playing at another level these days, having scored ten goals in his last four Barcelona outings. He is truly an incredible player to watch.

Elsewhere, amidst the greatest economic crisis of the country’s generation, Olympiakos edged out Panathinaikos in Greece’s biggest derby on a goal scored by Englishman Matt Derbyshire. This is always an explosive encounter, played under maximum tension. In the north of Germany, Schalke nearly took possession of first place in the Bundesliga, only to be held by a solid Hamburg SV team in an entertaining 2-2 match. In the south of France, Marseille beat Lyon 2-1.

Finally, in a great disappointment, Guus Hiddink will not lead Cote d’Ivoire in the World Cup. This is a tragic development tied to contractual obligations and an inability to find a way. Guus was the ideal man to take the elephants far into the tournament. Reportedly Sven Goran Erickson, the former coach of England and Mexico, will be appointed shortly. Collective yawns from Drogba & co.