Leo Messi scored TEN important, if not spectacular, goals in Barcelona’s last four matches. Ten, eight in La Liga and two in the Champions League against Stuttgart. His extraordinary form has generated worldwide awe, particularly because he often makes it seem easy. Now even his Barca team-mates are mesmerized by the 22-year old Argentine whose tremendous talent is matched by a rarely encountered measure of modesty. 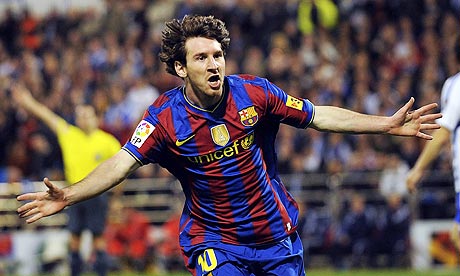 Messi attributes all credit to Barcelona’s style and system, seeing himself as one piece of the puzzle but no more. “I just play my game and things come together,” he says. This is true, he is surrounded by exceptionally technical players operating within a brilliant system of all-out attacking football. But his second goal against Zaragoza, for instance, demonstrated that he is truly sensational among the best, at least for the time being. His diminutive stature and quick cuts open spaces, throwing defenders off-balance. He often looks to create first before unloading well-placed shots just outside the reach of stretched goal-keepers. He drives or bends shots with a very quick release, leaving little time for reaction. And when he scores, he reveals the enthusiasm of a schoolboy.

There is no drama surrounding Messi, on or off the field. In contrast with Cristiano Ronaldo’s injury problems and temperament, Messi’s quickness and instincts propel him. He gets hit less often, primarily because of his stature and quick movement, but also because his game is not physical. Nor is he a pushover. He has shown toughness and even aggressiveness at times. When Rooney walked off the field in last year’s Champions League final between Manchester United and Barcelona he stated that Barca’s Andres Iniesta was the best player he had ever witnessed. That same respect and appreciation for a player’s performance and demeanor weighs very much for Leo Messi in encounters with opponents.

Comparisons with Maradona do not fit. Diego carried an entire country plus the south of Italy on his back for a decade and his era was marked by drama after drama. Messi is a different person. In Argentina he is not as idolized as he is in Spain. Messi has not made his mark with the Argentine national team at the same level as with Barcelona, but that may change in South Africa. And physically, will he maintain this extraordinary form at the end of a long season on top of last year’s long season? Remains to be seen. If nothing else, his last few performances have been nothing short of a privilege to witness.