This Sunday two great clashes that require no supplemental billing: Boca – River and Man Utd – Liverpool. Regardless of the positions in the table, these are the crucial encounters that weigh as much as all the other matches combined for the protagonists. There are also several good matches in Italy and a couple in Spain. In the south of France, also on Sunday, Marseille hosts Lyon.

This is technically the most feeble super-classico in memory, both clubs just above the crisis level and going through poor to mediocre seasons. Boca has been simply disastrous, without victory in the past seven matches, nowhere near their Copa Libertadores aspirations. Coming off losses at home to Racing and a trouncing away at Tigre, Boca players have one tremendous opportunity for some kind of redemption and pride restoration. River has been hardly better, fortunate to win some games despite being outplayed, showing little or no consistency, still mired in the mediocrity of the past few campaigns. The cast is the same, Boca led by elders Riquelme and Palermo, River by elders Almeyda and Gallardo. This in fact is the problem for both clubs – they desperately need better players, better formations. A loss at home against River would plunge Boca into the depth of the abyss further than at any time in memory. Boca’s passionate fans might revolt against the club. River has a bit of cushion, albeit a fragile one. If the play can match up the atmosphere, then Argentina’s Super-Classico will not disappoint.

Man United is in excellent form, near the top of the Premiership with a game in hand and after taking apart AC Milan on the way to the Champions League quarterfinal. Wayne Rooney is going through the most sensational part of his career, scoring almost every game and creating just as much. Meanwhile, Liverpool’s season has been a series of false promises, a frustrating inconsistency that nevertheless has the club in the quarterfinals of the Europa League and in a fight for the fourth and final Champions League spot next season. Easy for Man United? No, it will not be easy. But the outcome depends which Liverpool shows up. Momentum is positive for the Merseyside club after eliminating Lille in Europe, but if the performance at Wigan a couple of weeks ago is replicated, there is no chance. Rooney’s supporting cast will have to be counted on, particularly Nani and Berbatov. For Liverpool, a win away at Man United could cure a lot of the season’s pains. Neither team can afford to lose points and anything is possible on this day. 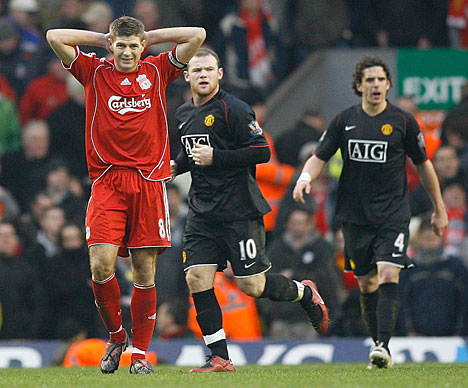 Four good matches this week-end in Serie A with top of the table implications: