Marouane Chamakh and Romelu Lukako are not yet familiar names, but both are on the direct trajectory to Premiership star status. While Marouane is ten years older than Romelu, they are enjoying tremendous seasons and seem poised for big club moves in the summer.

“I have always wanted to play in the Premier League and any striker wants to meet that challenge and play in the league” – Bordeaux and Morocco international, Marouane Chamakh. 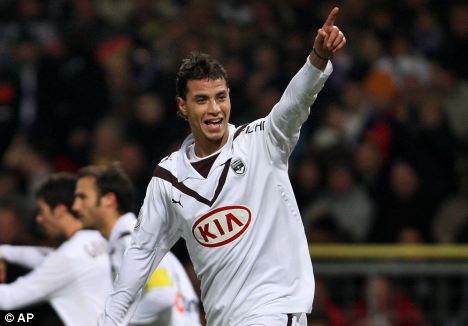 And so he will, unless Liverpool or Barcelona lure him first. Marouane has been repeatedly linked with Arsenal, the only thing holding up the move is Arsene Wenger’s frugality. Bordeaux is unwilling to let him go on the cheap, rightfully so. Marouane is out of contract at the end of the season and has already stated his preference for a move to Arsenal. Wenger has the first shot. The French connection, Wenger’s masterful way of bringing up young players, the exciting prospect of playing alongside Samir Nasri, Arshavin, Van Persie and Fabregas. It all fits. Still, Liverpool has expressed interest and Man City is capable of anything, but the real challenge comes from Spain. Madrid is tapped out both in terms of money and places, so let’s count them out. But Barcelona may give it a go as a replacement to Thierry Henry. That has to make Marouane think – it is a once in a lifetime chance to play on the best team in the world along Messi, Xavi and Iniesta. In all likelihood, Chamakh will be an Arsenal player in the fall on a free Bosman transfer and that should add further flavor to the Premiership.

Already dubbed the reincarnation of Didier Drogba, Belgian international Romelu Lukaku is the greatest sensation in Europe since Ronaldo (the Brasilian) debuted for PSV Eindhoven at 17 and scored a boatload of goals. Romelu, of Congolese descent, is a man-child, still only 16, but looking much older and stronger and not only playing at the highest level of competition but often dominating. He only came on the scene in May of 2009, but he has been stupendous for his club team Anderlecht. The biggest clubs are salivating at the thought of him, but how do you put a price tag on a 16-year old prodigy who scored against Ajax and Hamburg in the Europa League, twelve domestic goals this year, 68 goals in 68 matches with FC Brussels and 121 goals in 88 matches with Anderlecht in his youth career! Everton, Chelsea, Real Madrid, Manchester United, Milan, Barcelona and Arsenal have all shown serious interest. Stay tuned.