Chelsea followed Real Madrid out of the Champions League competition, following a gripping match at Stamford Bridge that was decided by two dominant factors: the exceptional form of Wesley Snejder and the aggressive, physical play of Inter’s back duo, Lucio and Samuel, along with Thiago Motta. In an encounter marked by Jose Mourinho’s return to the place where he built a spectacular team with Roman Abramovich’s oil money and became an imposing figure both in the Premiership and particularly with his players, it is fair to say that Inter played with unprecedented determination and deservedly went through.

Inter survived the critical phase of the match, the final ten minutes of the first half, when Chelsea was assaulting the Italian goal from every angle, coming ever so close only for a last millisecond intervention by either Samuel, Maicon, Lucio or Motta. When those four were beaten, Julio Cesar saved the day. Inter played with fire seemingly on every corner, with Motta and Samuel grabbing Anelka and Drogba. Ivanovic was literally muscled down twice. With the stakes so high, the German referee did not dare give the penalty, although he would have been right. Motta in particular got away with criminal acts throughout the match, but on the whole Inter played the entire match around the limits of the rules.

As Chelsea pushed forward the usual way, with Malouda and Lampard, there was hesitation on the right side and this is where Mourinho is warranted tactical credit. He kept the very dangerous Ivanovic in check by fielding Pandev on the left side of midfield with Zanetti behind him. Pandev did not have a spectacular match and missed a glorious opportunity, but neither was he overwhelmed.

The second half started as the first had ended, with Chelsea pushing, but then the game was totally taken over by Wesley Snejder. With an incredible display of vision, placement and touch he created no less than five great chances for the Italian team before Eto’o finally finished one. Milito twice, Motta, Pandev and Eto’o had wasted the kind of chances that generally come back to haunt a team and that is clearly what Mourinho was feeling. Each time, Snejder was magisterial in the middle of the field, a creative genius that neither Lampard nor Ballack could match on the other side. Mourinho might have made the dumbest move ever by taking Snejder off in the 84th minute had Chelsea scored on the ensuing set play. Then, with another ten minutes left including injury time, Chelsea could have sent the match into extra time or penalties and Inter would have been on the field without it’s offensive general, by far the best player on the day. 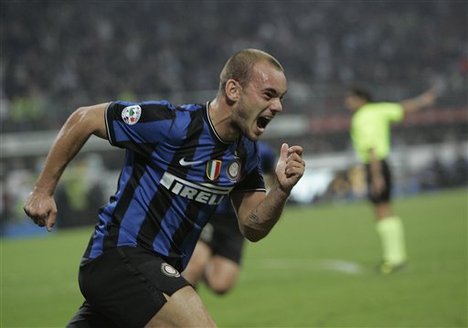 But is was not to be. Near the end, two bad episodes. Drogba’s send-off was entirely provoked by Motta, who ran back into the box and pretended to be falling down while grabbing Drogba, trying to drag him down. Drogba shook Motta off and then for good measure stumped on his ankle in retaliation. The referee saw the latter. From this point, Inter’s speciality kicked in – wasting time theatrically: Lucio’s imbecilic play near the end when, already with a yellow, he moved the ball forward about five or six times blatantly, then after wasting as much time as possible he ran up field to let Julio Cesar take the free kick. Luckily for Lucio, already suspended for the next match, Julio Cesar got the unnecessary yellow.

Inter is in the last eight, at last. An exit at this stage, coupled with its Scudetto run in critical danger, with his media relations and the Ballotelli episode, might have put Mourinho over the top. But for now all is still on course and if this kind of performance is replicated every Sunday, no team in Italy can play with Inter. For Chelsea, winning the Premiership and the FA Cup have become priorities, albeit consolation prizes. Abramovich & company must wait another year for the chance of a European Championship run.