According to multiple reports, PSG is about to pay Berlusconi’s Milan 62 million euros for 30-year old Zlatan Ibrahimovic and 27-year old Thiago Silva in what constitutes a heist of laghable proportions. Paying 20 million euros for a declining star with limited skills and a massively over sized ego and 42 million for Thiago Silva??? when Brazil is full of Thiago Silvas at a fraction of the price begs for a head examination for the PSG sporting director. Who’s that? Ah, Leonardo, ex-Milan man, standing next to the PSG manager, Carlo Ancelotti, a Milan character through and through, two fellows who did not put together a soccer transfer, but rather wired some money home. This is a blatant inside job with the largesse going to the uber thrifty Lombards and the repercussions to the Parisians who will not have to wait long for the catastrophic outcome. 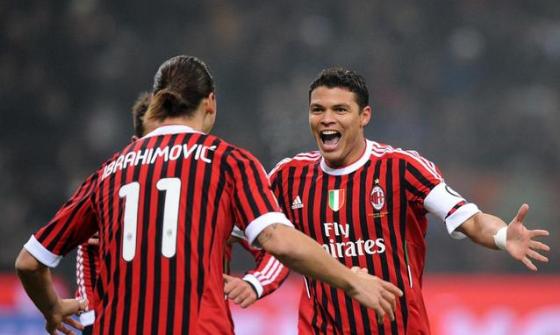 Milan got van Bommel, Pato, Seedorf, Ronaldinho, Ibra, Robinho and many others for a song, flashing a historical brand to hide the reality of an aging club who has fallen out of the European elite for a long time now and simply stopped investing adequately in players. Club president Galliani is the master of manipulations, stirring up controversies with players under contract (Tevez and Balotelli just the latest examples) to pry them away for nothing from clubs that paid top transfer fees. This game started out with Shevchenko, sold to Chelsea for a fortune and brought back to Italy for a fraction of what Chelsea paid after a short, mediocre tenure. Galliani sold Kaka to Real Madrid for $65 million, billing him the greatest blah blah blah, and when the scam was exposed tried to buy him back for $12. Ronaldinho was brought in for almost nothing from Barca. Robinho was virtually shoplifted from Man City, who had enough presence of mind not to make the same error with Tevez. Even Pato was bought for a pittance.

Galliani achieves these results by breaching protocol. He scavenges clubs’ misfortunes and player’s personal crisis. Usually he reaches out to players under contract and greases their interest in a fresh start at Milan well before that player’s club gets wind of the arrangement, effectively forcing the hand of the club to accept a vastly reduced fee for an unhappy player. Kolarov of Man City is the latest example. Bought for 20 million from Lazio, Kolarov is not thrilled with his playing time at a club with a roster as deep as Man City’s. No problem: Galliani already offered to take him to Milan, for a cut price of 5 million, of course. Tevez is still with a foot at Milanello. But the player Galliani really covets from Man City is Edin Dzeko. One can only hope that City does not fall for Galliani’s tricks with Dzeko. For now, PSG can be crowned the new fool in the transfer market, a title previously held by Chelsea and Man City. When a club spends more than 100 million euros on Javier Pastore, an ok Argentine player who does not figure in his country’s top 20, Thiago Silva, an ok defender who should not be valued at more than 5-10 million and Ibra, an ok player who’s imposing personality overshadows his performance on the field and is past his prime, the calamitous results are not far behind. No stars in their prime, no Messi or Iniesta, no young exceptional talents i.e. Neymar, just Pastore, Ibra and Silva – 100 million. Bravo Leonardo. As for the fools that signed the checks, try something else.