Even with a less than stellar performance, Barcelona scraped into the semi-finals of the Copa del Rey with a 4-3 aggregate win over Real Madrid despite letting a two-goal lead slip at Camp Nou and sweating the final quarter hour of the match. The result left a defiant Jose Mourinho under heavy pressure to deliver the Champions League and La Liga trophies, having compiled a dismal record against Barcelona in his brief tenure as Real boss.

Madrid had started by far the brighter of the two sides and should have been ahead within seconds as Gonzalo Higuain screwed his shot wide when clean through on Jose Manuel Pinto. Higuain then hit the bar and was again denied by Pinto before Barca appeared to have put the tie to bed with two goals just before half-time. Pedro Rodriguez finished calmly at the end of a trademark run and pass by Lionel Messi before Dani Alves rocketed a shot in from the edge of the box with the last kick of the half. 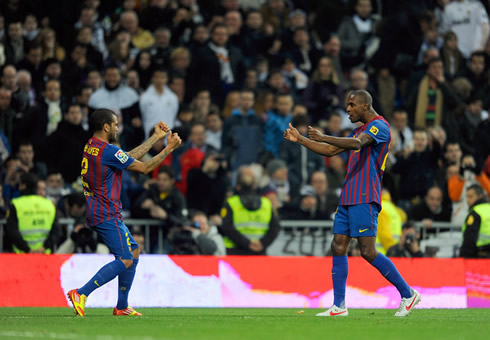 But the visitors responded with two goals in four minutes themselves midway through the second period as Cristiano Ronaldo rounded Pinto to slot home before Karim Benzema took advantage of some slack Barca defending to equalise. Madrid pushed for the winner but finished with 10 men as Sergio Ramos was dismissed for two bookable offences.

The drama started before the game as Jose Mourinho started Pepe despite his stamp on Messi in last week’s 2-1 first-leg defeat. However, in line with a much more offensive approach from Mourinho, Pepe started in central defence with Kaka and Mesut Ozil drafted into midfield. And that positive approach was nearly rewarded inside the first 10 seconds as Gerard Pique misjudged a pass from Alves and allowed Higuain in on goal, but the Argentine pulled his shot wide.

The visitors were pressing extremely high up the field, denying Barca the time and space to build their usual flowing passing moves. However, the European champions were still dangerous on the counter and Cesc Fabregas should have done better when he broke clear but his pass to Messi was behind the Argentinian.

Higuain then came tantalisingly close to making up for his earlier miss as his dipping shot from fully 30 yards hit the underside of the bar and came back out. Despite Madrid’s pressing, Barca insisted on trying to play the ball out from the back and they were nearly caught out when Higuain intercepted a Pinto clearance but the striker again could not find a way through as the keeper saved with his legs.

Barcelona were then forced into a change on 29 minutes as Andres Iniesta limped off to be replaced by Pedro. And the substitute was to prove crucial as the hosts scored twice in three minutes before the break. Firstly, Messi collected the ball in midfield and drove forward at the Real defence before laying a beautiful pass into the path of Pedro and the winger finished with aplomb.

Lassana Diarra was lucky to stay on the field two minutes later as having already been booked he chopped down Messi just outside the area, but the free-kick was to prove costly for the visitors anyway as Alves latched onto Messi’s deflected effort and bulleted a shot into the top corner.

Real thought they had a way back into the match eight minutes after half-time but Ramos’ header was ruled out for a pull on Alves. They did half the deficit on the night 14 minutes later though as Ronaldo raced through on goal and showed great composure to round Pinto and slot into the empty net. Four minutes later it was 2-2 as Pique’s clearance was intercepted by Ozil and Benzema took the ball past Carles Puyol before dispatching it into the net.

Messi twice came within inches of sealing the tie as his free-kick drifted just over and then another effort from just outside the area went wide, but the hosts had to endure a nervy finish before Ramos was sent off for a second yellow card with two minutes remaining.