A match between great contenders with the ability and firepower to put on a display of exciting, attacking football featured exceptional talents on both sides of the pitch and carried the promise of a truly spectacular, memorable World Cup final. What materialized instead was a tense, fiercely contested, error filled physical encounter marred by a lack of flow, an incredible record of fourteen yellows and one red and a general sense of pressure that kept growing with every passing moment. It took 119 minutes for the elusive winner to finally come, a logical victory for Spain that was not as pretty as it was correct. Spain stands on top of Europe and now on top of the World as reigning champion, lifted by a supreme generation of players without precedent in Spanish history, an experienced but still young group that stands positioned to win everything in play for the next four years and possibly become the best team of all time.

An early goal from either side: that was the best wish for an entertaining final. It nearly came when Sergio Ramos’ spun header was turned away by Stekelenburg with a brilliant save, but then for the remainder of the first half most of the action involved the English referee – another uninspired FIFA selection – dishing out cards, scoldings and warnings as he captured the spotlight repeatedly. No one wants to remember the World Cup as interpreted through a self-centered referee whose style did not match the occasion, though it must be said his job was not easy. The Dutch created nothing in the first half, content to break down the Spanish build-up and look for a quick breakout. The game turned into an incessant battle in the middle of the field, a hit-fest of hard tackles and knock-downs, none more blatant than Nigel de Jong’s full studs-up autograph left on Xabi Alonso’s chest, only a yellow for the English referee.

David Villa had one good chance in the first half and shanked a perfect Xavi cross, but most often the path to the Dutch goal was ripped up by a hard foul. Meanwhile Robben and Snejder were effectively neutralized, while Robin van Persie hardly touched the ball. The second half ensued with Spain still searching for a way, looking to exploit any little space available, while Holland played with the same strategy Mourinho’s Inter adopted to get past Barcelona – physical battle and counter. Spain wasted three golden chances in Sergio Ramos’ uncontested header, Capdevila’s miss-volley and especially David Villa’s close range tap in, still unclear how such a great goal scorer could have missed that one. But it was the Spanish keeper Casillas that saved the day as Holland finally generated a chance. Wesley Snejder released Robben alone with Casillas forcing the Spanish keeper to produce surely what has to be considered the save of the tournament. It was a psychological moment almost replicated near the end when Puyol’s hesitation set Robben through again, this time with Puyol in full pursuit and just enough obstruction to force the Dutchman to miff the opportunity. Robben charged the referee madly after the play demanding anything, to no avail. Had he gone down, Puyol, already on a yellow, would have been out and the balance of the match would have tilted Holland’s way certainly.

When not kicking opponents, this is what van Bommel did all afternoon.

Like four years ago the World Cup final went into extra time, Spain bringing on Fabregas and Navas by now, Holland countering with Elia and Van de Vaart. Spain wasted two more great chances to go ahead in the first 15 minutes of extra time. The Arsenal midfielder broke free alone with Stekelenburg and released a poor left footed shot that was blocked, then minutes later Iniesta was in the same position to finish but tried to cut back to his favorite right side and the space closed. Frustration piled up high, it looked like the outcome was headed to penalties. After Heitinga received his second yellow, Holland was certainly playing for penalties. Fernando Torres was thrown in for the last 15 minutes for Villa who has his poorest match of the tournament and Torres was indirectly involved in the winning play. It was his cross that was cleared only as far as Fabregas, who in turn released Iniesta for the winner.

Andres Iniesta dedicated the goal of a lifetime to Dani Jarque.

Holland cannot dispute the outcome. Its best player Wesley Snejder did not get the ball enough, partly because of the lingering selfishness that is still evident on the Dutch side. Robben never looks to pass the ball first. Each and every time he cuts in looking to create just enough space to pull the trigger. Snejder was screaming for the ball and rarely got it. Van Persie was nonexistent, seen only arguing with Snejder about taking a couple of free kicks. Van Bommel, a dirty player of the highest caliber, spent the entire game fighting, feigning and trying to manipulate the referee. There was so little from Holland in terms of creating chances, movement off the ball, elegant passing. An ugly win was the objective and for some time it appeared that it might just happen. 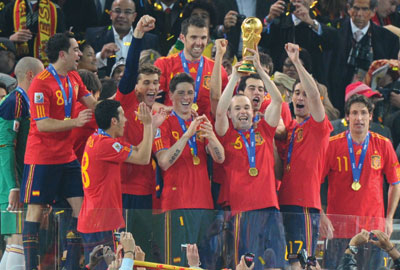 Game-winner Iniesta and Spain on top of the world.

Holland was the best team in the world in Munich 1974 and Buenos Aires 1978 despite losing the World Cup final to the host nation on both occasions. On this day, Holland was second best. Perhaps the strategy was miscalculated, as this performance revealed no resemblance to the “total football” Orange Machine of the past. Spain climbed to the top echelon of football with four successive 1-0 wins against Portugal, Paraguay, Germany and Holland, results that hardly reflect the quality of its game. Players like Puyol, Xavi, Iniesta and Sergio Ramos rarely come around, perhaps every generation or two. Spain and Spanish football, an amalgamation of Barcelona and Real Madrid, represents the triumph of the beautiful game, a clinical brand of passing delivered by rare champions who maintain an admirable amount of modesty throughout ultimate achievement. Xavi, Iniesta and Puyol won the Euros two years ago, six titles with Barca last year, another La Liga this year and now the World Cup, yet they are firmly grounded in they desire to just play correctly and with the same youthful spirit. Spain never put together its best possible game at this World Cup, but each performance was enough to advance and to win the tournament. The best is yet to come.

The scene in Madrid at the very beginning of a long week of partying ahead.