The world’s two best teams reached the final of the World Cup with performances worthy of champions. Spain and Holland will meet on Sunday in the climactic point of the tournament, marking the best of all possible finals for fans of the game and FIFA alike. Neither team has ever won a World Cup, although the magical Holland team of the 1970s, unluckily lost two finals in 1974 to Germany in Munich and in 1978 to Argentina in Buenos Aires. In reaching the final, Spain has already made history. With only two losses since 2006 and having won the Euros in 2008, this is the best Spain of all time. Even the tournament’s top scorer will likely be decided on Sunday, as David Villa and Wesley Sneijder, both with five goals and fundamental to their teams’ success, will vie for the title. 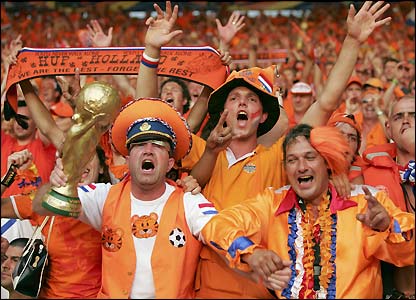 Excitement: Holland will try to win its first World Cup ever.

Tuesday Holland overcame a magnificent effort from a resilient Uruguayan team that could not have played with more heart and determination, even while missing three key players. Two stupendous goals and a highly suspect one saw the Dutch through, but it was far from comfortable. Uruguay controlled the pace for a good part of the second half while the game was tied. Sneijder’s goal seemed irregular, but it was allowed to stand and shifted psychological aspect of the match. At 3-1 Holland relaxed and one can only wonder what might have happened had Forlan been on the field for the frantic final 6 minutes. Or Luis Suarez. It was a thrilling ending to a good match that left both sides gasping for air. Holland is jubilant to move forward, while Uruguay will contend for third place and then return to Montevideo as heroes, with so much to be proud of.

Uruguay golden boy Diego Forlan played injured and scored against the Dutch, but his team came up just short.

Wednesday’s anticipated match between Spain and Germany, though less dramatic, was a great display of jogo bonito. Spain’s performances during this World Cup have gradually improved since group stage, but the sense is that Spain has still not played its best game yet. That can be said again after yesterday’s categoric victory over a high flying Germany that simply did not have the ability to contend with Spain’s play-makers. As always, Xavi and Iniesta where the maestros of the match, directing traffic, creating spaces, moving the ball with sublime poise and technical agility. Germany was content to sit back and try to break out on the counter, but found very few opportunities. It was Spain that controlled the tempo throughout, though their chances went awry. It took a stupendous, emphatic header by Carles Puyol, who played like a man possessed yesterday, to break the deadlock and Spain could have added to their tally before the final whistle, but in the end 1-0 was enough.

Without any debate, the better team won. Germany was unable to replicate the energy of the England and Argentina demolition matches, mostly because of the Spanish midfield play. Still, the Germans can be very proud of an unexpectedly great run marked by two of the most “feel-good” victories ever. With so many young players having acquired this World Cup experience, the bar has been raised to the highest of expectations. Germany will play for third place on Saturday, just like four years ago, against the tournament’s revelation Uruguay.

The stage is set for a great encounter between two exceptional teams that should provide a great show on Sunday. Holland will have magnificent support as always. Chartered planeloads are taking thousands more Dutch to this “once in a lifetime” experience. It is a match without a clear favorite – the best performance of the day will prevail, hopefully without any controversy. Having said that, Spain might have saved its best for last. Even without Fernando Torres on top of his game, the Spanish midfield duo of Xavi and Iniesta are in a class apart. Holland’s best chance is to score first and early, forcing Spain to change shape and play with greater urgency out of rhythm. It will be either Spain and David Villa’s day as top scorer, or Holland’s and Wesley Sneijder’s. Before the tournament started 91minute predicted this exact final with Spain as the eventual winner. There is no reason to make a change. May the best team win, enjoy the game!