“I would not pay one guilder to see this Brazil play.” Those were the words of Dutch legend Johan Cruyff, one of the main protagonists and developers of total football so sorely missed from this World Cup, prior to yesterday’s match between Holland and Brazil in Port Elizabeth. Point exaggerated a bit, but well taken. Playing with an definitively defensive alignment once again, Brazil was eliminated from the World Cup by a Dutch team that showed character, persistence, technical excellence, creativity and a great desire for attacking football even when ahead.

Wesley Sneijder was the main protagonist of the Dutch come-back.

Under Dunga the world’s most fashionable team devolved into a defensively focused unit effective at shutting down adverse creativity and at physically, sometimes even thuggishly, tackling opponents into submission. There were plenty of signs for concern during the qualifiers, but with a clean slate in South Africa the disciplinarian Dunga was allowed to test his program on the highest platform. The result cannot be regarded as a surprise. In fact, 91minute.com predicted this exact match-up and outcome. Dunga started yesterday with eight defensive players – the back four, Julio Cesar, Dani Alves, normally a defender, and two defensive midfielders in Felipe Melo and Gilberto Silva. Three offensive players in Robinho, Kaka and Luis Fabiano, of which only Robinho showed good form up to this point of the tournament.

Perhaps on another day Brazil’s 1-0 would have held up. Martin Stekelenburg, the Dutch keeper, was sure on this day and made one critical save in the first half to keep the deficit narrow. And the own goal was a psychological turning point, with the Dutch now going forward relaxed instead of desperate. But after the second Dutch goal, Brazil looked alarmingly unprepared to play from behind. Who is going to score a goal? Lucio started to come up, Dani Alves and Maicon did their best, then Dunga added to the Brazilian frustration by replacing Luis Fabiano – unquestionably Brazil best available forward – with little Nilmar, a move that made the Dutch defenders’ life easier. Neymar and Pato were not around to call on, Josue and Ramires simply did not seem like the solution. 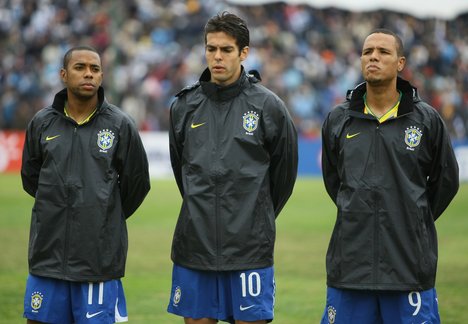 Holland missed a couple of golden opportunities to kill off the game, but managed to hold up strongly to the final all out Brazilian assault which never seemed more feeble than on this occasion. At the end of the match Brazilian players seemed shocked, but there was also a look of resignation on some faces, a clear understanding that this is the end of the Dunga era. Felipe Melo, who started the match very well but was involved in two decisive episodes as the present day embodiment of Dunga as a player, stated that it was hard for him to describe his feelings. “I don’t have words,??? he said. “I just called home and my son was crying. I have to apologize.”

Holland’s historic victory, celebrated throughout the Orange masses around the world, some jumping into Amsterdam’s canals, may be the beginning of a dominant period for Dutch football. With an exceptionally talented group of players that has many good years ahead, Holland fully believe now that they can win this tournament and foreseeable ones. For giants of the game like Brazil, a perennial favorite to win every match in any competition, a moment like this provides the opportunity to start a new chapter, to re-energize and introduce a fresh vibe. The future looks bright. After all, Brazil is already qualified for the next World Cup.