Despite playing its poorest match of the tournament, Spain ended up winning Group H by edging out a 10-man Chile who continued to play with great determination and winning neutral fans in the process. Both teams advanced as projected, largely due to Switzerland’s inability to win by a two goal margin against feisty Central American minnow Honduras. Spain and Chile traversed a very delicate combination of scenarios, as one goal in either match would have changed destinies, but Chile in particular must send Honduras a thank you card for holding the Swiss, thus ensuring Chile’s passage.

Chile was in no way inferior on the day, proving that it can run with any team at the World Cup. Spain’s first goal, an obvious give-away followed by a great first touch from David Villa, came somewhat against the run of play. One contributing factor to the game’s pace may have been Estrada’s unwarranted send-off, another over-zealous refereeing error, yet in the end it turned out to be inconsequential. Chile scored a deserved goal to solidify its chances even in defeat, while Spain played without any inspiration in the second half. Ineffective Fernando Torres proved again that he is entirely out of form, Xavi and Iniesta were far from dominating, only David Villa seems in excellent form.

Spain will now take on Portugal in what promises to be a great Iberian match-up with infinite sub-stories. With a very long history of sporting, cultural, economic and social rivalry, with most of the players familiar with each other from La Liga, with Spain’s Barcelona core taking on Real Madrid’s Cristiano Ronaldo, it should be an encounter of the highest caliber not to be missed next Tuesday. Spain has three days to find its groove and play up to potential, while Portugal must be thinking of adopting the same scrappy, physical, counter-attacking strategy that worked against Brazil. 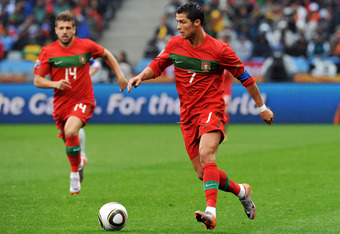 Cristiano Ronaldo will need to be in top form against Iberian rival Spain.

Chile has an even shorter period to prepare for the ultimate World Cup test, a date with Brazil. Chile’s lively, attacking, high energy game with plenty of off-the-ball running, led by a master technician in Argentine Marcelo Bielsa, means that Chile will not be intimidated by Brazil and will take its chances well. Brazil, one of the tournament’s favorites, has shown only glimpses of its best so far but expects to get past the Chileans without much difficulty. Based on the first three matches, the game will be tighter than comfortable for Brazil if Chile can overcome its psychological deficiency of the past and believe. Bielsa will ensure that.

Chile must be mentally prepared for Brazil.

Brazil and Portugal finished one-two in Group G after fighting to a stalemate not even worth mentioning. Meanwhile, Drogba and Ivory Coast bowed out of South Africa with a relaxed 3-0 win over North Korea, a winning exit that nevertheless fell far short of the Ivorians’ potential. It may be a long time before Ivory Coast assembles a group of mega-talented players such as this one. Yet overall, the Elephants performed below expectations at the World Cup. With more heart, desire and concentration they could have advanced. It’s all academic at this point. So long Elefanti.