Spain’s World Cup became complicated after its unthinkable loss to Switzerland in the first group game, possibly setting up an earlier than anticipated meeting with Brazil next week. It was a match that demonstrated once again that anything can really happen in a game. Determination and loads of luck carried the day for the Swiss this time around. Yet regardless of the Swiss disaster, Spain’s game so far has looked very enjoyable, with fluid movement and a technical level nothing short of brilliance. How far will the beautiful game take them? 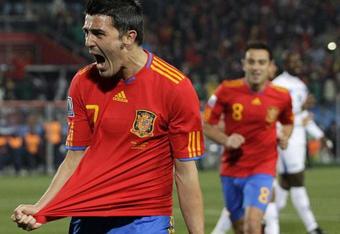 David Villa missed a hat-trick against Honduras with misplaced penalty.

If anything, Spain needs a little more swagger. Passing the ball around superbly and creating spectacular scoring chances without capitalizing on them amounts to staging a political protest inside your own home. Against the Swiss, Spain created so many chances in the first half – they really could have been up easily three or four at the half – that they fell into a relaxed state. When the Swiss goal came against the run of play, some urgency finally kicked in but lack of concentration, poor finishing and some bad luck resulted in mounting frustration.

Spain’s jogo bonito was back on display yesterday, a la Barcelona, gliding the ball around the pitch with long stretches of possession, constant movement, spectacular build-ups. At the end, a 2-0 victory over Honduras hardly reflected their dominance. Spain played very relaxed again, without pressing for goals like their life depended on it. Chile, who has also looked great, will be a true test of vigor for Spain. With most of the players coming from Barca and Real Madrid, maybe fatigue and nagging injuries are a bigger factor than previously thought. But it would be catastrophic to lose Spain at group stage. It would be the best team of all time that did not make it out of the group.