The first ever World Cup to be hosted by an African nation, South Africa 2010, is on the verge of kick-off. In less than 24 hours, the home country’s Bafana Bafana will take on Mexico in the competition’s inaugural match. After years of preparation and long qualifying journeys, the 32 finalists are set for action. Not a moment too soon for most, as training camps reached their limits, while the global audience adjusts to fit this most revered event at the center of every day life. 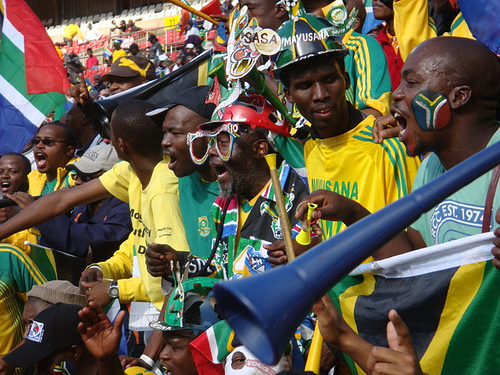 Embracing the prestigious opportunity to represent their countries at the World Cup, players confirmed with determination and common purpose, though challenges persisted during the final preparation stages. Particularly remarkable is the number of injuries that have forced teams to scramble for solutions, Robben, Drogba, Nani, Rio Ferdinand, Vidic, Pirlo among the injured. From an organizational standpoint, FIFA must be relieved at the low level of disruptions to this point, although a couple of serious incidents have caused alarm (the stampede and the journalists robbed at gunpoint inside their hotel). Undoubtedly, the ability to adapt to local conditions quickly will provide an advantage for some.

Here are the 91minute predictions for the 2010 World Cup in South Africa:

Group A: 1. Uruguay, 2. Mexico, 3. France, 4. South Africa. Uruguay has a potent attacking force in Forlan and Luis Suarez, underrated talent at every position and an excellent technician in Washington Tabarez. Mexico will edge out France for second place. The 2006 finalists have an excellent roster that consistently fails to deliver under the guidance of Raymond Domenech. South Africa, better in 2006, may surprise, but are unlikely to advance past group stage.

Group B: 1. Argentina, 2. Nigeria, 3. South Korea, 4. Greece. Beside the easy group, Argentina had a solid preparation period. The players seem to be united and in good form. Nigeria should get past Greece and South Korea with superior talent and plenty of local support. The Greeks do not have enough firepower to challenge, but are strong defensively, while S Korea will give it a go.

Group C: 1. England, 2. Slovenia, 3. USA, 4. Algeria. England fields an experienced group, though central defense and an ideal complement to Rooney remain two of Capello’s main concerns. USA will perform well, but the magical run of last year’s Confederations Cup is unlikely be reproduced. Slovenia, a team with no stars and excellent teamwork, will surprise and quietly sneak into the second round. Algeria and USA will both finish on 4 points, one behind Slovenia.

Group D: 1. Serbia, 2. Germany, 3. Australia, 4. Ghana. Serbia is loaded with excellent players from top to bottom and will edge out an aging German team for the top spot in the group. Australia seems less dangerous without Hiddink’s magical touch, while Ghana is without Michael Essien and in poor form.

Group E: 1. Holland, 2. Cameroon, 3. Japan, 4. Denmark. Holland brings a formidable team, though one key component (Robben) suffered a serious injury in the last preparation match and is likely to miss the entire first round. The Dutch will win the group without him, especially if they can set the tone against the Danes. Cameroon will do well to advance to the second round, while Japan showed grit in the preparation matches against England and Ivory Coast.

Group F: 1. Paraguay, 2. Slovakia, 3. Italy, 4. New Zealand. Great team fielded by Paraguay, strong in every sector of the field and increasing confidence. Slovakia will edge out an aging, defensive Italy for second place. Despite five quality attackers, Italy has serious cracks in the midfield and defensive zones. Slovakia was dominant in qualifiers and will not be intimidated. Second place will be decided in the last match of the group, the direct clash between Slovakia and Italy.

Group G: 1. Brasil, 2. Portugal, 3. Ivory Coast, 4. North Korea. Anything can happen in this group. It is conceivable that three teams will end up with six points each (2W, 1L), or with five points (1W, 2D) each. Portugal, well supported in South Africa, without Nani but with Cristiano Ronaldo to lead the way, may take second place. Brasil does not seem dominant this time around. The wild card is African favorites Ivory Coast. The Elephants bring a superb roster of players, but without Drogba’s full power, they might fall just short.

Group H: 1. Spain, 2. Chile, 3. Switzerland, 4. Honduras. Easy group for the most balanced team in the tournament. Spain is spectacular through the last player on the bench and should have a smooth passage to the final, if they can get past their Round of 16 match which may be their toughest. Chile will give Spain a good run, but Switzerland and Honduras lack the resources.