The word “saga” gets thrown around loosely among Anglo-American journalists, often in an effort to create a buzz about an unremarkable story, but the Mourinho episode during the past week correctly merits this designation. The “saga” ended today with the official appointment of Jose Mourinho as Real Madrid’s manager for the next four years, capping a week of tension and speculation that was finally resolved through an old school gentleman’s agreement. After Mourinho was unable to persuade Moratti to let him go for free, despite maximum accomplishments and no desire to continue in Italy, Real’s boss Florentino Perez flew to Milano to get his man. Perez and Inter boss Massimo Moratti came to an agreement fastidiously over a good bottle of Chianti and everything is now official. 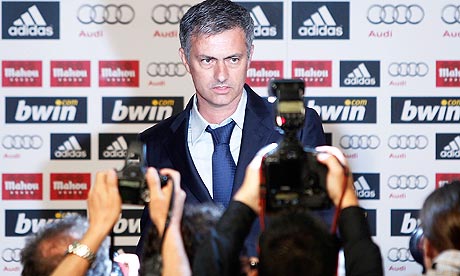 Moratti, forever grateful to Mourinho for Inter’s magical season, did not hide his bitterness about the modality of the break-up. The Portuguese’s departure loomed above the club’s success prior to, but particularly during the past week of what should have been pure joy. Since Inter’s European triumph, it has been impossible to ignore this story. Inter fans celebrated at reduced intensity, weary of an uncertain future and of the impact of Mourinho’s departure, a man who had the loyalty of all the players, Balotelli apart. Moratti should do everything to get Guus Hiddink and the club will be absolutely ok. With Mihajlovic, everything will collapse. The Serb has neither the personality nor the experience to be in charge of Inter.

Mourinho now embarks on the road to establish himself as the best ever. Unquestionably, this new “project” as he put it is very much a personal quest as it is about Real Madrid’s success, perhaps more. Yet as loaded as Madrid is, this vision of glory presents obstacles that Mourinho may not be fully aware of. Pellegrini mentioned something on his way out that made a lot of sense. He made reference to Madrid’s dysfunctional circle within the club’s leadership, an element that affected the past seven managers to have come and gone. At the center of this circle is Madrid’s “Sporting Director” Jorge Valdano, an Argentine who played for the club briefly and has managed to stick around ever since.

Valdano was not a great player and is not revered in Argentina, but he seems to be a master manipulator at Real and always in favor with Florentino Perez. There is no doubt that Mourinho’s arrival diminishes Valdano’s role at the club. The two will inevitably clash. It will happen this way: following a poor result, Mourinho will abstractly make mention of the impact certain whispers at the club sabotaging his program, the media will have a field day, paranoia will feed on itself and possibly test allegiances among the players. It is very unlikely, given those two personalities, that Mourinho and Valdano will work together for long.

Mourinho appears to be on a collision course with this man.

Then there are the players. Mourinho will be tested at times, as he was with Balotelli. If a problem emerges with Cristiano Ronaldo or Higuain, be it performance, work rate or personal life, Mourinho knows only one way to handle it: as a benevolent autocrat. No one player is bigger than the club, correctly. He will have the difficult task of managing a new set of egos and personalities.

Despite his tremendous success, Mourinho has now departed boisterously from Porto, Chelsea and Inter. There is no turning back. Ultimately, what he wants more than anything else is love. No amount of trophies will give Mourinho the satisfaction of knowing that he was loved by the players and the fans alike. For now, he has earned the respect of players and supporters everywhere he has been, but the love is still elusive. He had Inter’s love forever if he would have made this move to Madrid differently. Now he must be pleased to have only respect.